Everything-as-a-service (and the end of technology) 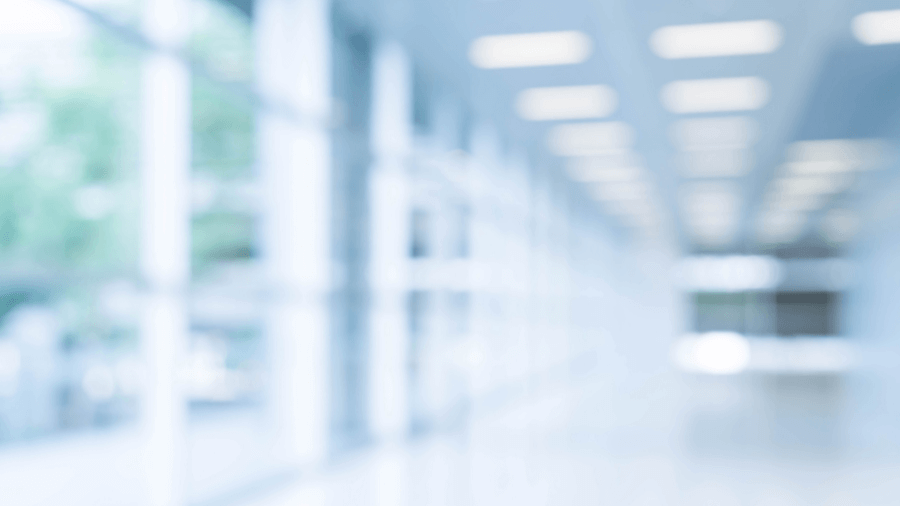 There’s a photo. You know the one. The one showing all of the electrical products that have been displaced and bundled into the modern smartphone. It makes most people smile and marvel about how powerful technology has become. And it has. But something bigger is happening. Technology is disappearing — both in the consumer and business sphere.

Anyone as old as me will remember when every office desk had a fixed-line telephone, a bulky monitor, and massive computer processor (with the fan going off all the time) — as well as all of the attendant paraphernalia like boxes of floppy disks and let’s not forget the fax machine!

And then there was the computer room — the windowless, air-conditioned room that hosted racks and racks of servers. The room was usually populated by a large IT team — probably making up 10% or 15% of all staff — that maintained this hardware while configuring software, running reports and building simple software programs.

Today, if your office is anything like ours, your computer equipment probably consists of a smartphone and a tablet computer. And you probably have a single IT person — if you have one at all.

How did we get here? Technology got more powerful for sure. But we didn’t turn that power into more technology, as science fiction predicted, but into making technology invisible. Everything we want — servers, software, IT resources — can be provided to us when we need it. Much like other utilities, we just switch it on and it’s there for us. We have the benefits of technology, rather than the technology itself.

Implications for the technology industry

This has various implications for the technology industry. The importance of system integration, for example, is declining as system setups become much less complex. But, for B2B software providers like us, it means two things.

First, in this new paradigm where business customers can instantly turn on new technology services, they can also instantly turn them off. Switching costs are disappearing alongside technology and, to keep customers, providers need to be offering ever-increasing levels of value-add. To paraphrase the American business magnate, Warren Buffett:

only when the on-premise tide goes out do you discover who’s been swimming naked!

We’re not yet there in banking, but it’s only a matter of time before we see which vendors have been relying on high switching costs.

The second implication is that the nature of how we create these compounding levels of value-add is also changing.

The source of value continues to shift

If we look at the history of the Enterprise Tech market, we can trace a clear evolution of value creation. First came hardware — giant machines from IBM that allowed companies to manage simple processes at scale, like airline bookings. Then, when software decoupled from hardware, it became possible to build more logic into, and generate more value from, software. This allowed enterprises to handle more complex functions like logistics and inventory, using software from companies like SAP.

With the advent of cloud computing and software-as-a-service, we saw a new shift in value creation away from ease of integration to ease of use.

Essentially, as software became software-as-a-service (SaaS) and companies were freed from the need to install it, run it, maintain it and upgrade it, they didn’t care so much about integration. SAP R/3 had comprehensive functionality which all worked seamlessly together, but that didn’t matter much anymore when integration disappeared from view. Instead, the users could choose the solutions that had the best user experience (UX). And so monolithic applications began getting displaced — it started with Salesforce, but quickly moved to narrower, easy to consume applications like Slack and Zoom.

We are now moving to a new phase. The next phase of evolution will come as microservices, APIs and A.I. allow for technology to become simultaneously more finely-grained, easier to integrate and smarter — putting us on course for everything-as-a-service.

As Jim Barksdale, former CEO of Netscape once said,

“there are only two ways of making money: one is to unbundle and the other is bundle”

After the SaaS un-bundling, we’ll move into a phase of putting things back together again. However, this re-bundling won’t see us consuming functionality-rich applications, but as-a-service (which is what some companies are betting on). The trend towards smaller and better services isn’t over. Instead, the opportunity is for the platforms that integrate these best of breed functions to reduce friction and lower costs.

But integration won’t be enough. With improvements in AI, competitive advantage will be obtained through integrating AND connecting customers with the right services at the right time.

Except that this won’t be enough either. Services will continue to disappear. In the case of banking, the first phase of digitization was about dematerialization— removing the physical stuff like cards and cash — but the next phase will be seamlessly integrating banking with the rest of our lives, making it all but invisible.

Bank proprietary channels — web portals, apps, chatbots — will give way to third-party channels like WhatsApp, WeChat or whatever comes next. And, like technology providers, banks will have to provide increasingly levels of value-add if they are to keep their customers. In practice, this means that they’ll have to increasingly help consumers to make better informed financial and commercial decisions, introducing them to the right services tailored to their context and needs, and delivered frictionlessly over the right channel. And as solution providers, we’ll need to make this happen.

Orchestrating value through systems of intelligence

We call the platforms that can orchestrate value in this way systems of intelligence — or systems of networked intelligence. It is an emerging category and there are few examples to illustrate it, but we are proud that additiv is one. 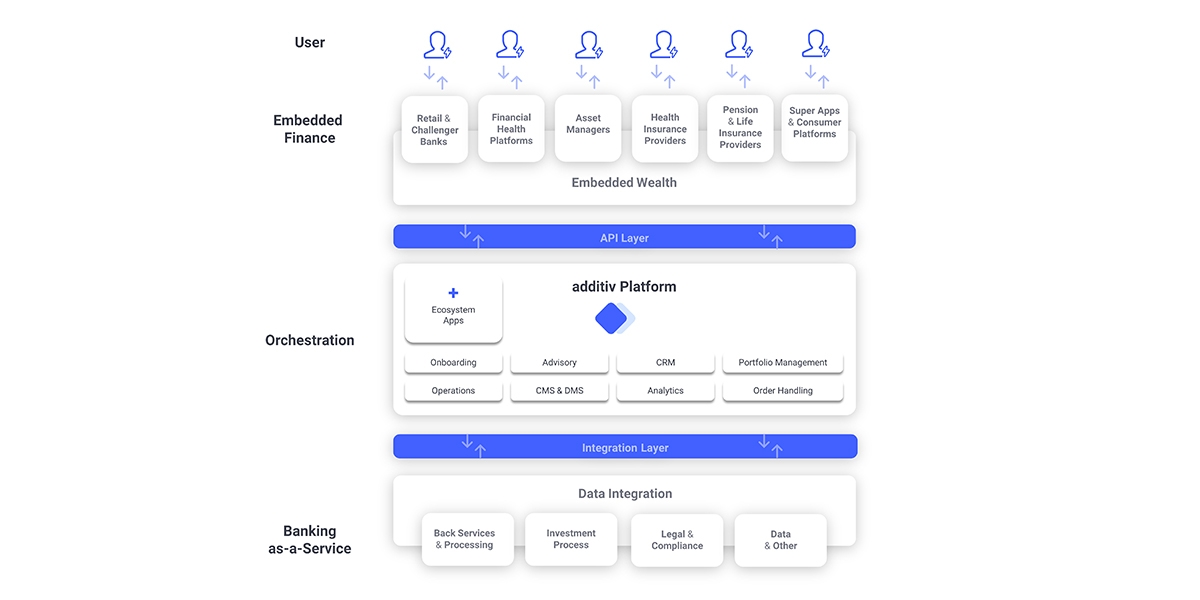 Final thought — a move from competitors to collaborators

In most presentations of additiv, I get asked about our biggest competitors.

But I think this is increasingly the wrong way to look at industries. In our information economy, we’re moving to a state where, on the one side, you have platforms that orchestrate value for their networks and, on the other, you have networks. In the case of service providers, this makes them collaborators not competitors. So, the question I think people should ask companies is: are you a platform provider or a platform participant? At additiv, we’re a platform provider looking to digitally upgrade the wealth management industry and we’re looking for as many collaborators as possible to come with us on this journey; to realise the future of everything-as-a-service. 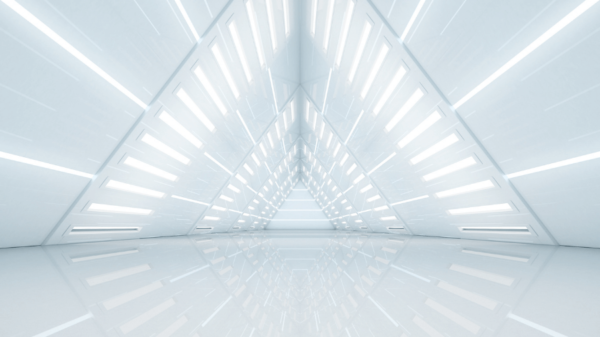 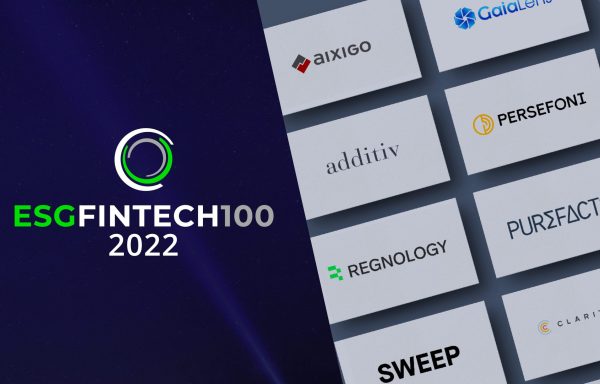